Showing posts from 2011
Show all

November 30, 2011
The Toilet Example  (c) Copyright 2005, Niclas Winquist ;) Mutex: Is a key to a toilet. One person can have the key - occupy the toilet - at the time. When finished, the person gives (frees) the key to the next person in the queue. Officially: "Mutexes are typically used to serialise access to a section of  re-entrant code that cannot be executed concurrently by more than one thread. A mutex object only allows one thread into a controlled section, forcing other threads which attempt to gain access to that section to wait until the first thread has exited from that section." Ref: Symbian Developer Library (A mutex is really a semaphore with value 1.) Semaphore: Is the number of free identical toilet keys. Example, say we have four toilets with identical locks and keys. The semaphore count - the count of keys - is set to 4 at beginning (all four toilets are free), then the count value is decremented as people are coming in. If all toilets are full, ie. there are no fr
Read more

Linux Kernel Summit 2011 second day official photo. I'm there on top, under the fourth from right to left.
Read more 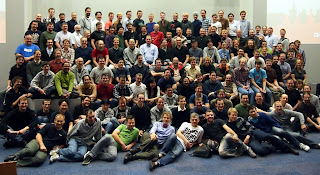 To me those were the richest days of the event. Thank you Mauro and Angela! Photo cortesy of: http://linuxtv.org/events.php
Location: Old Town Square 934/5, 110 00 Prague 1-Old Town, Czech Republic
Read more

Finally I have my books!

August 05, 2011
My books were delivered today. The DHL guy woke me up today morning, less than a week after placing my order. Amazon were fast this time. I'm happy. :-)
Read more

July 30, 2011
On May 20 2011 I've placed an order at Amazon for three books: C Programming Language (2nd Edition) The Design of the UNIX Operating System [Prentice-Hall Software Series] Operating Systems Design and Implementation (3rd Edition) The delivery estimate was set to June 20, 2011. Today July 30, 2011, the books did not arrived yet. I've contacted Amazon after June 20. Amazon asked me to wait until July 22. On July 25 they gave me total refund. Well, this is my first non success story about Amazon but I'm warned about no tracking information when using Expedited International Shipping. It is almost unbelievable. How can Amazon send $ 300 USD order without having tracking information? Yesterday I've ordered the same books plus other two. But this time I'm using the expensive Priority International Courier. The delivery estimate is: August 3, 2011 - August 9, 2011. Let's see if it will arrive this time. The new order: C: A Reference Manual (5th Edition)
Read more

July 08, 2011
In a 40 min talk, Greg Kroah-Hartman creates and submit a patch. Is this possible to do in a weekend? I'll try. http://www.youtube.com/watch?v=LLBrBBImJt4
Read more

July 08, 2011
I'm testing Eclipse-cdt to see if helps me develop for the Kernel. Following only the first steps of: http://wiki.eclipse.org/HowTo_use_the_CDT_to_navigate_Linux_kernel_source Made Eclipse understand all Linux Source code. I'll need some time as the interface is richer than vi/gedit...
Read more

June 27, 2011
I wanted to distribute the header files placed on /usr/include/linux by a custom kernel-headers package. Isn't it just put the file at /home/peter/rpmbuild/BUILD/kernel-2.6.38.fc15.new/include/linux ? No! This is only 50% of the work. The other 50% consists of adding a line to the file: /home/peter/rpmbuild/BUILD/kernel-2.6.38.fc15.new/include/linux/Kbuild The line looks like: header-y += pst_syscalls.h And voila! Now it is done! The expected result is: [peter@KDPeter ~]$ rpm -qf /usr/include/linux/pst_syscalls.h kernel-headers-2.6.38.6-27.peter4.fc15.x86_64
Read more

distcc is my friend!

It is not Kernel code yet, but I liked it. I added some lines to Fedora Wiki on Building Custom Kernel: http://fedoraproject.org/wiki/Docs/CustomKernel#Building_a_Kernel_from_the_source_RPM As I do not know about how many time this content will be available on the site, I took a screenshot of it. :-)
Read more

Your Amazon.com order has shipped

May 21, 2011
Have you heard about distcc? distcc home page distcc is a program to distribute builds of C, C++, Objective C or Objective C++ code across several machines on a network. distcc should always generate the same results as a local build, is simple to install and use, and is usually much faster than a local compile. As I'll compile Linux Kernel hundreds of times in the upcoming months, and as I have two available servers, I decided to give distcc a try. It is easy to install and use. There are two modes: Regular and Pump-mode. Regular mode is easy to use but I was not able to boost the performance over 15%. The pump-mode did not work on my 64 bits system. I've tried pump-mode on 32 bits system, it worked easily but the performance gain wasn't as high as I was expecting. For now I decided to not use distcc. But I learned about a magic performance argument for "make". It is "-jX", where X is the number of simultaneous actions that "make" will
Read more

May 21, 2011
I got inspired by: The origins of Linux I was bored and looking for genuine challenges! I think I found it! I'll become Linux Kernel Developer. This goal is turning my boredom into fun! My 4 fun steps plan: 1 - Update my 2006 article about kernel modification. The updated version will follow the community rules, and will expand concepts explanation. 2 - Read three books that Linus talks about: C Programming Language , The Design of the Unix Operating System , and Operating Systems Design and Implementation . 3 - After being away from the keyboard to read the books... Start to hunt and kill Kernel Bugs. Today I would choose to do this at Device Mapper or at Memory Swapping. 4 - Becoming productive! This means being able to make patches that are accepted by the Kernel Development community.
Read more